(This isn’t the sort of story I usually post on my blog, but it’s a true story and deserves to be told.) 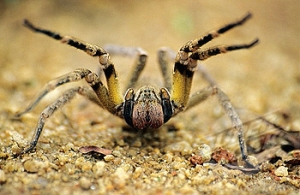 Part One:
The first incident happened on my way to theater rehearsal during my Theatricus days. As I was stopped at a red light, a giant, yellow spider started crawling down the front of my windshield. When I say giant I mean it had about a leg-span of about three inches with great, big, fat legs and huge fangs. I kind of freaked out, but only a little, because after all, I was safe in my car… for now (not-so-subtle foreshadowing). After unsuccessfully attempting to dislodge the giant yellow menace with my windshield wipers, I reached the freeway and got my car up to 50 mph. Finally, the beast flew off. Hurrah, no more giant yellow spider.

When I got home I spent a good two hours Googling terms like “giant yellow spider hawaii” and searching through mug shots trying to find something resembling my car spider. I found nothing close to it. And everyone from Hawaii reading this has probably never seen anything like it either.

I’m driving on my way to a club meeting and crawling down the front of my windshield along the exact same path is the same freaking huge, yellow spider. Two thoughts shoot through my brain:

Sure enough, giant, yellow spider makes a bee-line for the passenger window and crawls into my car, disappearing on the far side of the passenger seat. This is not okay by any stretch of the imagination.

So I pull over at a service station and spend fifteen minutes searching (tentatively) through my car for the giant yellow spider. Can’t find him, and I’m late for my game, so I get back in and start driving. Once I start driving again, I see the giant yellow spider in my rear view mirror crawling along the back window (to which I remark, “man, that sucker is fast”). I pull over again to try to find him and hit him with a book. Once again, no spider.

I finally reach my destination, driving on pins and needles the whole way, and recruit Luke to help me look for the spider in my car. All we find are a couple strands of web in the back. So I figure, if we leave the car alone for a while, mutant spider will try to build himself a web, then maybe I can catch him out in the open and hit him with a book. Besides, I’m like twenty minutes late already.

My friend Dave needs a ride into Waikiki, despite my warning about the current spider situation. So we get in the car and I start driving. Ten minutes later, something touches the left side of my neck. So after I perform a very manly scream and do a full-body spasm, I can no longer feel anything on my neck and Dave is laughing at me. After assuring me that it was probably just a leaf that blew in through the window, I half-heartedly agreed. So, I drop off Dave, return to my neighborhood, and as I’m getting out of the car, I find a strand of web connecting my shoulder to the dash board.

This time, I spent closer to eight hours on Google trying to find some kind of giant yellow spider in Hawaii to figure out what exactly I am dealing with here. If a mongoose is the natural predator of these things, I am prepared to catch a mongoose and lock it in my car until one of them is dead. But I find nothing like my car spider in the entirety of the internet.

Every day for the next three weeks I spend a good ten minutes searching my car before getting into it. But I never see it again.

I was at the Food, Lodging, and Hospitality Expo where some two hundred vendors are there hawking their wares. As it happens, there was a Terminix booth there, so as I was chatting it up with an exterminator, I remembered about the giant, freaking yellow spider that used to haunt my car. The exchange went something like this:

Matt: “Hey, maybe you can help me identify this giant spider that used to haunt my car, and tell me if it was poisonous.”

M: “It was slightly bigger than this cane spider” (indicating the cane spider pinned to his display). “But the legs were twice as fat and it was bright yellow.”

M: “No. Well, actually I found a couple strands of web.”

T: “hurmm…. It sounds like you have a Brazillian Wandering Spider.”

M: “Are those found in Hawaii?”

T: “What most people don’t realize is that ALL spiders are venomous. Since they don’t have teeth and they don’t have jaws, their only way to feed is by injecting their own stomach acids through their bite, which liquifies muscle which they then drink. Of course some are more deadly than others.”

M: “Oh… so I probably should have set off a bug bomb in my car right away to be safe…”

T: “That probably wouldn’t kill it.”

T: “You should probably get rid of the car.”

Back to my Google-fu. Of course now that I know the name of my spider, the very first web search pops up an image that causes me to proclaim “That’s it! That’s the spider!” Even though the Wikipedia photo wasn’t a yellow one, like my car spider, I would recognize those giant fangs anywhere.

How close to death was I with this critter on the side of my neck? From wikipedia:
“The Brazilian wandering spiders appear in Guinness World Records from 2010 as the world’s most venomous spider.”

I think that’s good enough to qualify as yet another of my infamous near-death experiences.