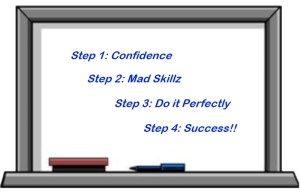 We naturally feel trepidation whenever we are confronted with a new task. Well, perhaps “naturally” isn’t the correct word since one-year-olds don’t have the same hesitancy. In fact, that nervousness is something that is a learned trait. Perhaps because we get laughed at or ridiculed when we fail at something as a child. Or maybe because we actually get physically hurt attempting a task. Whatever the cause, we (two-years-old and over) somehow develop this feeling of trepidation when we are confronted with something new.

Because we seek to avoid failing, falling, or fumbling, here’s how we normally seek to confront that mysterious new “thing” in our path. First, we want to build up our confidence. Second, we want to develop some skill. Third, we want to attempt it. Then finally, we achieve the results or success that we are looking for.

Do the thing and you will have the power. ~Ralph Waldo Emerson

Sometimes you will fail, fall or fumble. Any failure is a lesson in how to achieve success on your next attempt. Any fall is a signpost on where to step carefully next time. Any fumble is a reminder to keep your eye on the ball. Each attempt increases confidence on the next attempt. The only time that failure is final is if you QUIT.

So don’t try to gain the confidence first to do the thing you’re been waiting on.

Nine times out of ten, your fear will disappear the moment you start. More of us are held back by fear of failure than by failure. The only thing that can build up your confidence, is action.

Just do it. ~Nike, Roman Goddess of Victory

What have you been postponing or procrastinating on this week?